In recent years, two-dimensional (2D) materials and a broad variety of their unique properties became a major area of interdisciplinary research across physics and engineering disciplines. At City College, experimental research of 2D materials was pioneered by Dr. Vinod Menon, Chair of Physics at the City College in the Division of Science, whose interest laid in a special class of 2D semiconductor materials – transition metal dichalcogenides – promising a revolution in electronic and optoelectronic applications. This unique expertise of Dr. Menon’s group has recently allowed to further expand the horizons of potential applications of 2D semiconductors via collaborative work with the group of Dr. Alexander Khanikaev, Professor of Electrical Engineering. These collaborative efforts have recently culminated in the publication of several articles in a high-profile open-access journal, Nature Communications, where the authors reported results that hold promise to revolutionize optical communication and reveal new exotic physical phenomena.

In their first publication “All-optical nonreciprocity due to valley polarization pumping in transition metal dichalcogenides,” the Khanikaev and Menon labs tackled the property of reciprocity of light propagation. From everyday experience, we know that light emanating from a source, such as a laser or a lamp, can travel equally easily in any direction, including forward and backward. This seemingly obvious property appears to be one of the fundamental properties of light, and one of the limiting factors for optoelectronic applications, where signals must be enforced to propagate only in one direction and blocked in the opposite. The researchers from Menon and Khanikaev’s labs were able to limit the propagation of light to only one direction by using the property of two-dimensional semiconductors to selectively absorb light propagation in the opposite direction, going so far as to include a proof-of-concept device which can be integrated into on-chip photonic circuits and telecommunication networks.

Their work can be the beginning of advancing electronics by hybridizing electronic and optical technologies to combine their strengths for high-speed data transfer and active control of optical signals. According to Dr. Khanikaev, “this is still an early study that shows we can combine the two, and we can control one with the other. For us, the main challenge was designing the structure capable of performing with the metrics relevant for practical applications. As for the next step, we will focus on an active control of directionality and steering of optical signals.”

In the second article, also carried in collaboration with ITMO University, Russia, titled “Experimental observation of topological Z2 exciton-polaritons in transition metal dichalcogenide monolayers,” the researchers explored topological properties which can emerge due to the coupling of photons in optical nanostructures and electrons in 2D semiconductors. 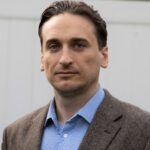 Topological electronic materials, referred to as topological insulators, represent two and three-dimensional materials where the current flows on the surface or edges, compared to other electronic systems where there is activity throughout. Dr. Khanikaev pioneered an analogous concept in photonics in 2012 demonstrating that light can also be enforced to propagate only along the edges of a deliberately designed “photonic topological insulator.” According to Dr. Menon, one motivation to study photonic rather than electronic topological materials was because in the latter electrons tend to interact with each other. Thus photonics was an excellent playground to explore fundamental properties of topological light. However, as Dr. Khanikaev admits, without integrating with active materials, photonic materials would remain passive and of limited interest to applications. To resolve this challenge, in their new work the authors conceived an idea of a hybrid topological system containing both photonic and electronic degrees of freedom. “If you have these hybrid particles of half-light and half-matter, you have an option to control electrons with light or you can control light with electrons,” said Dr. Khanikaev. 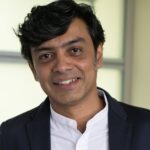 The boundaries between disciplines are disappearing. Even though I am in physics and Alexander is in electrical engineering…[Khanikaev], we both work on manipulating light and how it interacts with matter to get these fundamentally important and technologically relevant effects. So, we come from the same overarching motivation and the end goals are very similar, although we are in two different departments. — Dr. Menon

In both papers the researchers were able to hybridize the light particles, granting them mass alongside their regular properties, causing the exciton-polaritons to interact more readily. This can lead to nonreciprocal and topological photonic structures integrating materials like transition metal dichalcogenides to emulate other material systems, specifically, systems with strongly interacting quantum excitation, which would be a major advance for quantum computers and emulators.

Along this line, and moving toward quantum realms and quantum applications, in a separate article entitled “Enhanced nonlinear interaction of polaritons via excitonic Rydberg states in monolayer WSe2,” the Menon lab approached the challenge of pushing their system to the quantum limit.

The publication builds on earlier research of the Menon lab published in Nature Photonics in 2015 that demonstrated the possibility of strongly coupling material excitation in two-dimensional semiconductors with light, a feat first demonstrated by the Menon lab. This work motivated their current quest to realize single-photon switches. It is in this context that they exploited Rydberg states to realize switching at the level of 100 photons – still way off from the eventual goal. Although not at the true quantum limit, Dr. Menon is encouraged that this is a path forward for future quantum photonic technologies. An added advantage is that their solid-state systems can also be integrated with silicon computer chips.

The collaboration between the faculty members will continue to advance their photonics research. In addition, the pair are also Joint Principal Investigators, along with Dr. Carlos Meriles and Dr. Sriram Ganeshan from the Physics Department, on a $2 million grant from the National Science Foundation (NSF) that will bring a Chip-Scale Quantum Emulator to City College. It will facilitate future investigations by developing quantum simulators.

We have four very complementary skills and expertise that came together to highlight the fact that within the City College, we have the expertise to win these highly competitive open grants. — Dr. Menon