Founded in 2008, the Institute is headquartered at the CCNY Grove School of Engineering and led by Director and Distinguished Professor Sanjoy Banerjee of the CCNY Department of Chemical Engineering. The core of the Institute’s faculty consists of Dr. Banerjee’s colleagues in CCNY, with affiliated faculty from several other CUNY campuses 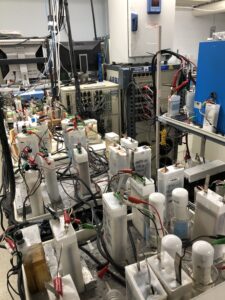 Students can work alongside the Institute’s renowned multidisciplinary faculty composed of over 30 scientists, educators, and researchers from several CUNY campuses, including CCNY, Queens College, Baruch College, and Hunter College, in their effort to explore the Institute’s three areas of focus: nuclear energy, renewable energy storage, and mitigation of the environmental impacts of oil-gas production and use.

Approximately 20% of America’s electricity is produced by nuclear energy, a low-carbon and scalable form of energy that is also vital to the nation’s national security. Research on nuclear energy conducted by the Institute deals with experimental and computational thermal-fluid dynamics focusing on the development of passively safe small modular reactors. A significant part of the Institute’s contributions related to nuclear energy involves the mentorship of undergraduate, graduate, and postdoctoral students interested in working in the nuclear or national security industries.

The Institute also conducts intensive research into energy storage to address the gap between the surge in renewable energy deployments and the development of energy storage to assure that power is available when needed, i.e., when the sun does not shine, and the wind does not blow. Aside from this research, the Institute also leads an initiative for a Grid Modernization Center towards a decarbonized electricity system, in conjunction with ConEdison, NYSERDA, and the DOE Office of Electricity.

To address America’s transition from oil-gas to sustainable low-carbon energy sources, the Institute also researches fundamental issues related to the environmental impacts of oil-gas systems and their mitigation.

Over the last decade, the Energy Institute has received over $30 million in funding from federal sources such as the Department of Energy and state sources, such as NYSERDA, for research in these three areas and training programs for students.