The CUNY Institute for Macromolecular Assemblies (MMA) was created by Dr. Ruth Stark in 2003 at the College of Staten Island (CSI) at the request of leaders in CUNY’s Office of Academic Affairs. In 2007, Dr. Gillian Small, who served as CUNY’s University Dean for Research and later as the CUNY Vice Chancellor for Research, supported the relocation of Dr. Stark and the Institute to City College.

Currently, the Institute has 32 faculty members, with about half from CCNY and a third at CSI. Additional members come from five other CUNY campuses: Lehman College, the CUNY Graduate Center, Hunter College, York College, and Brooklyn College. Whereas the majority of the MMA members are affiliated with their campus’ chemistry and biochemistry departments, STEM disciplines such as Physics, Chemical Engineering, and Biology are also represented.

A core mission of the Institute is to investigate natural and engineered macromolecular assemblies of proteins, nucleic acids, lipids, polymers, and carbohydrates that are of biological and medical importance.

As Dr. Stark explains it, a molecular machine involving DNA would transcribe instructions for making proteins that are essential for animal or plant survival. In her own work, Stark examines macromolecular machines in plants — tomatoes and potatoes. “The machine goes into action when, for instance, a potato tuber is cut and it has to have a defense to protect itself from drying out or getting infected.” These defenses include the deployment of chemicals and structural changes that construct a barrier of defined polymers against microbial invasion.

We’re interested in what I call molecular machines, large molecular organized assemblies. Even though these beasts are large and complex, we want to understand them at the atomic level. That’s our Institute’s distinctive feature: we are interested in both natural macromolecular assemblies, those that occur in nature, things like DNA and proteins and their complexes, and we’re also interested in designed assemblies. 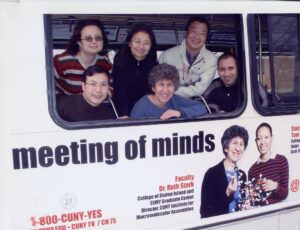 Three distinct research projects conducted by City College members highlight the scope of the CUNY Institute for Macromolecular Assemblies. First is the computational work by Dr. Themis Lazaridis (Professor of Chemistry and Biochemistry), who developed simulation methods to study and determine the structure of membrane-associated proteins that do not dissolve in water. These proteins are frequent targets for therapeutic drugs.

Another is the work of Dr. George John, (Professor of Chemistry and Biochemistry), who works in green chemistry, such as utilizing renewable materials for energy storage and cleanup of oil spills, thus avoiding the use of environmentally hazardous materials.

The third is directed by Dr. Ronald Koder, (Associate Professor of Physics and Biophysics), in the area of protein design. Dr. Koder studies light-driven energy storage and transfer in proteins that his group designs, comparing their performance and molecular structures to counterparts found in nature.

Some of our members are interested in something called synthetic biology, where you make a macromolecular machine that is inspired by nature. It’s not usually a mimic of nature, but you see something that happens, like energy transfer or light sensitivity, or something like that in nature, and you try to design a machine that will build on those properties, so it’s really the interplay of the natural and the designed that is distinctive in bringing people together in our Institute.

The Institute is also training the next generation of scientists as another of its missions. In collaboration with CCNY’s B3 (Biochemistry, Biophysics, Biodesign) Research Experiences for Undergraduates program sponsored by the National Science Foundation, CUNY and non-CUNY students are paired with City College members to train and conduct experiments. Recently, the MMA spearheaded a National Institutes of Health Graduate Research Training Initiative for Student Enhancement (G-RISE) grant that is training Ph.D. candidates to become accomplished researchers and expert mentors for beginning scientists.  MMA members also participate in outreach efforts, including hosting Open House events for high schoolers.  Faculty presentations have included sharing their paths to careers in science with STEM-oriented middle school students from the nearby A. Philip Randolph School. 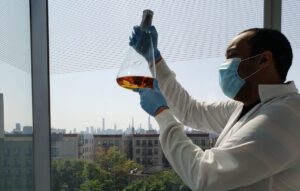 The Institute also provides opportunities for faculty researchers from various backgrounds and at different career stages to brainstorm about new ideas and grant proposals through monthly, informal faculty “chalk talk” networking events. “Everybody has very good spirits about it. Even though we are all experienced researchers, we feel that we need the feedback from each other.”

In the future, the Institute hopes to continue building the momentum of interacting with other Institutes and entities at City College that have similar missions but focus on different scientific fields, sharing recent research findings and training insights across the campus. There are also plans to increase collaboration with institutions outside CUNY as the MMA members collaborate on projects and increase the outreach efforts of the Institute.

We’re looking to reach further into scientific areas that are cognate but that we maybe haven’t explored. We’re also looking to reach institutions that we have not partnered with really intensively yet; I use Columbia as an example, because that is one where we and our colleagues at the Advanced Science Research Center have a lot of good connections.