Last fall, City College announced the College-wide Research Vision (CRV), a competition for seed funding for a research project led by teams of faculty from different disciplines at the university. The CRV aims to support a project that addressed real-world issues facing our world and was able to have a direct impact and applicability to the New York City Area.

The year-long competition process ended in September when the winning team,” Energizing Equity: Co-creating Scalable Urban Resilience via Climate Solidarity” was chosen. The team is led by Dr. Yana Kucheva of the Colin Powell School for Civic & Global Leadership and will receive seed funding of up to $200,000 annually for up to three years.

This month, the RICC seeks to highlight all teams involved in the CRV for their efforts. Another team that participated in the CRV was “Artificial Intelligence for Health Equity and Diversity (AIHED)” led by Dr. Ahiwel Undieh, the head of the Neuromedications Innovation Lab at the CUNY School of Medicine.

Dr. Undieh’s areas of expertise include neuroscience and pharmacology. He studies addiction, depression, and neurotraumatic disorders such as spinal cord injuries. Through his work attempting to find a way to block certain drugs from becoming addictive, Dr. Undieh became interested in the usefulness of Artificial Intelligence. For the CRV, Dr. Undieh assembled a diverse team with expertise in Medicine, Computer Science, Engineering, and more. 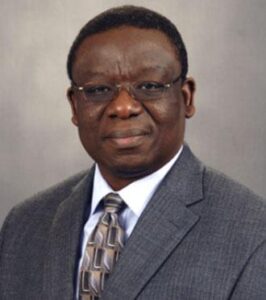 “My years as the Vice President, Associate Provost for Research here at CCNY exposed me to what a number of faculty were doing in engineering, in computer science, in math and other areas. And so, when the opportunity came for us to explore health applications of artificial intelligence, it was relatively easy to start a conversation because I knew the right people to talk to and we quickly put together a team to begin to explore that.”

One of the team’s main objectives was to address the inequities present in AI algorithms, which have developed a reputation for being biased against minority communities. The team sought to develop strategies for sourcing, collecting, and using data in AI systems to support data debiasing. This data would be applied in the real world in things like image analysis, and medical analysis. The team also planned to develop device prototypes that could be commercialized.

“We saw it to be very important that we come up with ways to devise algorithms for artificial intelligence that are more inclusive, and with less biases that could harm a subset of the population,” said Dr. Undieh.

One of the potential challenges of this research was the public’s unfamiliarity with AI and its applications. “Very few people even within the technical or professional fields are comfortable with what AI can do,” Dr. Undieh says of the apprehension toward AI.

The team’s plan to address these concerns with AI was to engage with the community through focus groups in the Harlem area where City College is located.“We have to look at not just artificial intelligence as a technical theme. We have to look at its application in the context of community health individuals that are going to benefit or be affected by this.”

Though the team was not chosen, Dr. Undieh is optimistic they will get to explore these research goals in some form in the future, as there are many opportunities for funding in the field of AI.