Engineering Materials to Control the Path of Light, contributes to the Quantum Revolution – Dr. Alexander Khanikaev

Mankind’s first computer, the abacus, appeared approximately 5,000 years ago in Mesopotamia. We have moved since then to advanced physics and engineering to develop electronics and eventually memory chips. Intel’s Andy Grove, a graduate of the City College’s Grove School of Engineering, catalyzed the shift towards the microprocessor. Today, Dr. Alexander Khanikaev of the Electrical Engineering department contributes to generating knowledge that will spur the quantum revolution.

“Many people believe photonics will be the next field for the quantum revolution because it enables some quantum phenomena which are not possible or hard to achieve in different type of quantum systems.” 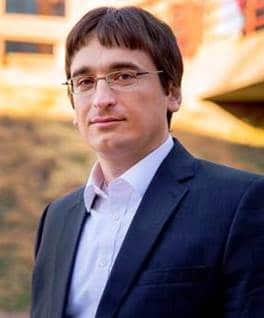 Condensed matter physicist by training, Dr. Khanikaev, leader of the Laboratory for Advanced Electromagnetics and Photonics, located in CCNY’s Center for Discovery and Innovations and collaborators at CUNY’s Advanced Science Research Center (ASRC), work passionately to answer the question: How can we structure materials to develop more efficient means of storing and transmitting data? They explore the theoretical principles behind engineering photonic nanomaterials and assess their practicality through experimentation.

Khanikaev’s team has developed novel approaches to trap and guide photons inside optical resonators. This technology has the potential to dramatically accelerate the pace of data transfer once refined and implemented in smartphones in the form of optical chips.

“Many of these storage and processing functions can be done with light, and more efficiently. The use of quantum bits would allow us to solve some classes of problems which are near impossible or impossible to solve with classical computers.”

“We are trying to make materials that make waves go in any direction we wish, and along any path we can program, without back reflection. This is important because then you can get most out of a signal, which carries information, either classical or quantum,” says Khanikaev.

Optical fibers are an example of a medium that enables photonic-based information transfer. In 2016, the team, for the first time, demonstrated the delivery of an electromagnetic signal from one point to another point., in a programmable reconfigurable way along any path without reflection. Their team’s metamaterials have been shown to modulate the behavior of light waves such that they become trapped in space. They were additionally able to switch between trapped and propagating wave states, a process similar to, just like how in flash storage, electrons can be switched between trapped and flowing states. First demonstrated in macrowaves, subsequently, the team has translated these successes to the optical domain, which is especially important for optical telecommunications. “Of course this all would not be possible without excellent facilities that we have now with Advanced Science Research Center,” states Khanikaev.

“Our collaborators have demonstrated that the way we guide single photons can actually transmit quanta. Moreover, they have demonstrated that you can transport entangled photons, essentially one to two photonic quantum bits. This is really revolutionary, as it can potentially lead to the realization of quantum simulators, computations, and algorithms.”

Unsatisfied with the current state of the technology, Dr. Khanikaev says, “We want to move one step further. We want these topological interfaces, not only to transmit, we want them to perform operations on quantum bits, essentially realizing quantum algorithms. Vacancies in crystals can be created via the introduction of other elements, called impurities. “These vacancies have very excellent quantum properties like quantum coherence. So now what we are trying to do is integrate these quantum emitters with our photonic interfaces so that these quantum emitters could entangle to one another. If we can integrate successfully, multiple numbers of beads (quantum emitters), we can entangle them all together and operate on them.”

Khanikaev’s novel strategy is based on existing semiconductor technology. This enables the photonic materials designed to be integrated with existing classical computing systems. One day he hopes that there will be hybrid hardware, which implements photonics and electronics. ”Now, we have mathematical coprocessors, maybe we can create quantum coprocessors, or combine the two so that they are heterogeneous.”

Dr. Khanikaev credits his global exposure to different types of science for his success, He lived in Japan for 5 years and worked with Sony and Omron engineers. “The research culture and process of grant acquisition is completely different in Japan. I was in Australia for one year and had a research associate position. Then, I moved to the University of Texas. Every time I moved, I was exposed to some new scientific concepts, new approaches. It was really enriching. Everything culminated, of course, at Queens College, and City College. It’s a completely different story because now you have to build an in-depth research program, you have to attract funding and that past career really helped me to do that because I’ve seen how to succeed in some sense — how to do research properly in different ways.”

Khanikaev’s contributions to the field have been recently recognized by his election as a Fellow of the Optical Society of America and a recent Special Creativity Award by NSF. Recently, Prof. Khanikaev’s received over 1M of external funding from the Office of Naval Research to support his research on topological polaritons, which is aimed at developing novel materials for more efficient manipulation of light on nanoscale. In addition, Khanikaev’s initiative to build a laboratory to study the quantum aspect of light-matter interactions at nanoscale has been recently supported by ~600K award from the Department of Defense. This award, funded under the special instrumentation program for Historically Black colleges and Minority Serving Institutions (HBCU), will provide opportunities for CCNY and the broader community to get access to some of the most advanced experimental facilities.

Stepping Into the Age of Cyborgs — Hao Su