Examining The Effects of COVID-19 on The Brain to Understand Long-term Symptoms — Dr. Andreas Kottmann

While New York was burgeoning into the epicenter of the virus, Dr. Kottmann, Associate Medical Professor in the Department of Molecular, Cellular, and Biomedical Sciences at the CUNY School of Medicine, believed his expertise in neurobiology could be useful in examining the effects of COVID-19, and decided to do anything he could to keep his lab open for experimentation.

“The knowledge of previous pandemics, like the pandemic of 1918, and also the previous coronavirus diseases, they all pointed to the possibility the virus affects the brain, and that some of the symptoms of COVID- 19 are caused by altered brain chemistry,” Dr. Kottmann said.

“I felt strongly that also we as neuroscientists are called to action, and we should at least challenge ourselves and ask whether we can contribute in any way.”

Sitting in on weekly conferences with former colleagues from Columbia University, distinguished scientists from a variety of fields, and clinicians on the frontlines in ICUs nearing full capacity, Dr. Kottmann grew convinced his team of neuroscientists and molecular biologists could contribute to painting a clearer picture of the havoc that the virus causes in patients. His original inkling was confirmed when studies toward the end of last year found almost 60% of all people infected with COVID-19 developed long-term neurological and psychiatric sequelae.

A deeper look into the patients who suffered from neurological and psychotic complications brought on by the sequelae induced by the virus found that many demonstrated signs of dysfunction indicative of the involvement of the basal ganglia — the part of the brain Dr. Kottmann’s research revolves around. 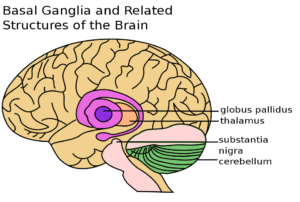 Dr. Kottmann and his team commonly work on the basal ganglia to understand its function in the human brain and how it is involved with Parkinson’s disease.

He calls the basal ganglia a “hotbed for pathology” because it is intricately linked with several of the most common neurological diseases, such as Parkinson’s, Huntington’s, and Alzheimer’s, and psychotic diseases like Tourette syndrome and Schizophrenia.

“When this became clear that there is some overlap between at least a substantial number of COVID patients that suffer from these long-term sequelae and our research interests, I challenged myself and my team to come up and deeply think about whether and how we have something to say about this and how we could contribute,” Dr. Kottmann said.

The basal ganglia’s involvement with long-term symptoms of COVID-19 that have been widely reported worldwide has been the primary interest of Dr. Kottmann’s recent work, allowing him to further his understanding of the function of this part of the brain.

By reading previous literature on the basal ganglia and contemporary theories on the cause of long-term COVID symptoms, Dr. Kottman and his team homed in on what they thought explained the sequelae — and it was different from what others were hypothesizing.

“We thought we should check whether the receptor of the virus, that the virus needs to attach to cells and then gain entrance into cells, whether that receptor might be expressed in neurons in the basal ganglia,” Dr. Kottman said.

Although this was an idea studied decades prior in relation to other viruses, the results of previous experiments were contested.

Dr. Kottmann and his team, unfazed, continued to conduct experiments at the bench and discovered the receptor of the virus — an enzyme that functions “like a little machine that produces several molecular compounds that neurons use to communicate with each other” — is present on a particular type of neuron in the basal ganglia.

“When Dustin (Dustin Zuelke, Ph.D. graduate student in the lab) showed me these results we were immediately excited for two reasons: first, we just had found that manipulating the activity of cholinergic neurons in the basal ganglia can reduce a severe side effect of current Parkinson’s therapy, called L-Dopa induced dyskinesia. Now, we discovered that the very same cells express the COVID-19 viral receptor, an enzyme that is known to produce neuromodulators.”

These neuromodulators, as their name indicates, are responsible for moderating the activity of neurons within the brain to ensure they are not too active or too stagnant.

By introducing COVID-19 viral spike proteins in the brains of mice in the lab, Dr. Kottmann and his team made a notable discovery — the viral protein changed the activity of the viral receptors on these neurons in the basal ganglia, forcing the “little machine” to produce neuromodulators at different rates in a complex manner.

“We believe now that maybe this is the reason it’s difficult to clearly define what actually are the functional consequences of COVID in the brain. Our finding might fit that self-description of many patients, who say they suffer from brain fog or that something is not quite right. It is not that the virus blocks the production of these neuromodulators. In many ways it is more insidious: the virus might alter the relative balance of different neuromodulators.”

With the help of his team and Aria Walsh, a Ph.D. student in the Molecular, Cellular and Developmental Biology Ph.D. program at CUNY, Dr. Kottmann submitted the results to an internal, interdisciplinary grant competition. Dr. Kottmann’s team won the grant and now hopes for more funding from the NIH.

Dr. Kottmann hopes his research could one day aid the discovery of medication designed to reverse the effects COVID-19 and similar viruses have on the dysfunction of the basal ganglia.

In the near future, however, Dr. Kottmann’s aim is to examine COVID-19 variants and how their impact on the basal ganglia varies, in hopes of potentially spotting indicators that could guide health care systems to foresee if certain new variants pose a greater or lesser risk to cause neurological complications. They also hope that their work might help to identify patients that could be at a greater risk than others of suffering from long-term sequelae before they show symptoms.

This, in turn, would allow medical professionals to surveil these patients and tailor therapies to them to mitigate the impact of the sequelae.

Since the virus has disproportionately affected socially and economically disadvantaged people worldwide, Dr. Kottmann thinks this potential outcome could be a significant step in reducing stigmas and disparities surrounding “long-haulers”.

“As next steps, we really want to see whether different variants of the virus have different effects on the brain. If we can convince ourselves that this is the case, I think the assay we developed will be useful both for population health investigations, as well as in patient specific, precision medicine settings.”

A Message from Deans Friedman and Lima