The effects of climate change and population growth are increasingly impacting food, water, and energy systems in cities large and small. Dr. Ahmed Mohamed, an Associate Professor of Electrical Engineering at the Grove School of Engineering at the City College of New York, researched the nexus of food, water, and energy as a part of IN-SOURCE, a project designed to develop models for sustainable urbanization in cities across the globe.

IN-SOURCE is one of 15 projects under the Sustainable Urbanization Global Initiative (SUGI), a global research initiative tackling issues related to the Food-Water-Energy- Nexus. SUGI was established by the Belmont Forum and the Joint Programming Initiative Urban Europe. The IN-SOURCE project was launched in 2018 and was completed in 2021. 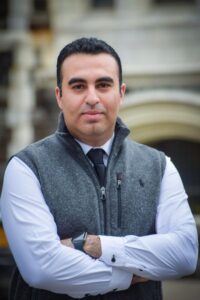 IN-SOURCE uses three different sized regions as case studies for their research. Ludwigsburg in Southern Germany as a low-density area, Vienna, Austria as a medium-density area, and New York City as a high-density area.

The three [Food, Water and Energy] are very interconnected and it’s very important for cities to make wise decisions about the use of food and energy and water and create the right decisions and policies that are optimal now, but also in the long run for better sustainable development.

The main objective of the study was to develop models that could be used as a framework for sustainable urbanization by policymakers globally. Dr. Mohamed’s contribution to IN-SOURCE focused mainly on the New York City case study area focused on improving the efficiency of wastewater treatment plants.

“We took a couple of wastewater treatment plants in New York as a case study, and we looked at how we can think of it more from a circular economy perspective.”

The 3D modeling developed by the study includes suggestions for best use practices for land based on food, water, and energy demands.

In his future research, Dr. Mohamed is interested in “energy equity”, or making renewable energy more affordable and accessible for low to medium-income communities.

“We are looking into decentralizing the energy production by letting the community share the ownership and benefits of renewable energy sources,” said Dr. Mohamed. He imagines that in the future, different community participants could come together and own solar power and energy storage systems that they would pay for together, which would improve access to clean energy.