“I use a computer basically to make modeling, to tell how the ocean flow pattern is, like the pressure and the speed and the water surface elevation.” 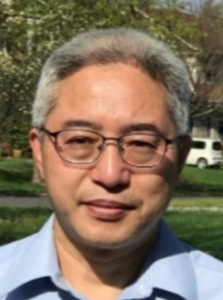 Over his 30 years of experience in the field, Dr. Tang has studied the ocean’s flow with an engineering focus, while also considering climate change and societal issues caused by events like Hurricane Sandy.

Alongside four CCNY colleagues and three external experts, Dr. Tang participated in the College-Wide Research Vision initiative and presented research on the environmental and societal impact of offshore wind farms used to create clean and renewable energy. Through a modeling-monitoring data framework, the research highlights the relationship between offshore wind farms and their close environments such as larval and coral systems.

Offshore wind energy is the energy produced from the force of the winds present out at sea that is transformed into electricity. Dr. Tang explains that offshore energy is more valuable than onshore energy as the winds at sea are stronger and can create more electricity than a similar farm installed onshore.

Tang and his team will continue their research as the role of offshore wind farms in the creation of green renewable energy is big in the New York Region and highly valuable nationwide.

“Because the country is moving towards green energy or at least kind of moving away from fossil energy, wind energy, and offshore wind energy is a big resource. That’s why the whole nation is putting a lot of effort into this area.”

The multidisciplinary project encompasses various areas of expertise, primarily in coastal, civil and electrical engineering, environmental sciences, oceanography and marine ecology, as well as atmospheric and social science. Dr. Tang’s focus within the team is to study and understand the influence of the farms’ infrastructure on their environment in terms of salinity, temperature changes, nutrients, and pollutant dispersion. 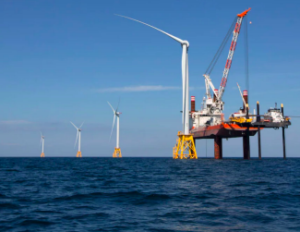 (Block Island Wind Farm, R.I., the 1st and only US wind farm)

Awaiting funding to move forward with the research, Dr. Tang and his team hope to inform the general public about the potential changes that an ocean’s structure modification could cause to the natural habitat of an ecosystem. “That’s what the people should be the most concerned about,” he said.

New York is the leader of the country in the offshore energy sector, and the field has many scientific and engineering topics left to study for researchers. Dr. Tang wants to encourage schools in the region to get more involved.

Lylia Saurel is a writer for the RICC and recent graduate from Baruch College, where she was awarded Institutional Investor in Journalism. She holds an AA in writing and literature and a BA in Journalism and Intercultural communications. She is a former reporter for Dollars & Sense and copy editor for The Ticker. Her work has appeared in The Ticker, D&S Magazine, Daily Planet online edition and others. In addition to written journalism, she enjoys photojournalism and the visual arts.

Using Waste as a Resource in Developing a Circular Economy – Dr. John Fillos