While some may see scientists working exclusively in labs, Dr. Zhengzhao Johnny Luo from the Department of Earth and Atmospheric Sciences challenges that preconception by flying into storms. 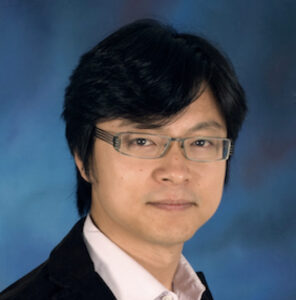 Having arrived to City College in 2007, Dr. Luo has since become a member of NASA CloudSat/CALIPSO Science Team in 2010. Meanwhile, he was also a NASA Team Leader that flew to observe storms in Houston in 2013 and Guam in 2014 in pursuit of investigating the leading question in his field, climate change and deteriorating air quality. For his research, Dr. Luo and his team earned the NASA Group Achievement Award in 2015.

Dr. Luo studies how convective storms transport pollutants from the surface to high altitudes and how these pollutants disperse across the globe. Knowledge of these processes is limited which restricts scientist’s ability to predict how changes in convective storms could affect climate change and air quality.

A lot of people have a misconception of atmospheric science. The stereotype is that we are weathermen, and we go on tv. That might be what some people do, but fundamentally we are scientists.

Dr. Luo’s research found how these storms can be as effective as hurricanes at transporting pollution, even across oceans. “As long as they can transfer pollutants from the surface to the upper troposphere 10-15 km above the surface, jet stream and other fast air motions can transport them globally.” This is how pollutants from East Asia arrive to the western United States as well as dust from the Sahara Desert gets transferred to the Americas, including the Caribbean and Florida.

Two major types of pollutants are particularly important to atmospheric scientists. One is ozone which protects humans by absorbing skin damaging ultra violet rays, but if present at the surface can contact and irritate skin. The other is carbon monoxide and nitrogen oxide, common pollutants from combustion. “You’re not realizing that you are burning the atmosphere every time you are driving.”

As more evidence (on climate change) gets accumulated and circulated, the decision makers and politicians will take note and take it more seriously.

In addition, Dr. Luo and his PhD student’s latest research publications found how pollutants could be used to fingerprint a spectrum of air motions in the atmosphere that are otherwise invisible. “It’s interesting to find a method to track how hurricanes transfer invisible pollutants in the atmosphere.”

His research heavily depends on computer models and simulations and have become integral to complimenting scientific observations in understanding different atmospheric events. However, they also present a challenge as models struggle to capture every detail. To improve the realism of the models, Dr. Luo compares the observed behaviors of storms with what the models simulate.

For other features like cloud scale processes that the coarse-resolution models are not able to directly simulate, Dr. Luo utilizes parameterization which also needs validation. With satellite images along with observations conducted while working in the field to confirm those models, scientist can better predict the future of climate change. 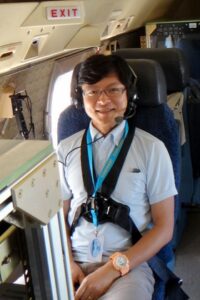 Dr. Luo onboard a modified Gulfstream G-V aircraft to conduct research for the National Center for Atmospheric Research.

Regarding future storms, even as emissions fell from pandemic inactivity in 2020, it is too early to predict the impact on storms. “The climate systems are interconnected. You pull one string, the other will be ratcheted.” However, Dr. Luo shares that some researchers predict the number of hurricanes may decrease slightly. Yet, the trend is that they’re getting more destructive and stronger. “The power will increase dramatically. Think of boiling water, increase temperature of the bottom, the water will boil more violently. If you increase the temperature of the surface of the ocean, the storm will have stronger intensity.”

If you are really interested in climate change, environment change and air pollution, spend your time to lay the foundation. Study physics, math, and computer programing well. Then you’ll be ready.