In the late 1950s, a pharmaceutical crisis transcended science. Thalidomide, an over-the-counter drug marketed with the intent to treat morning sickness as an antiemetic, amongst other ailments, was also causing miscarriages and birth defects, such as unformed limbs, when given to pregnant women across Europe. 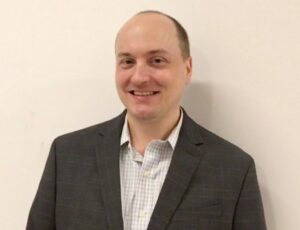 Dr. Mark Biscoe, Professor of Chemistry at City College, explains that, unlike 2D molecules that are similar when mirrored, the orientation of the atoms in 3D structures of molecules present new problems. “Think about your hands, if you line them up on top of the other, the top is different from the bottom.” Any way that they’re orientated, they will never match identically. As such, mirrored 3D molecules are treated differently by the body. In the case of thalidomide, one mirror image was the therapeutic molecule, the other a teratogen, an agent that causes malformation of an embryo.

When you see the drug candidates coming out of pharma, they tend to be very flat because of the high throughput ways they generate and test molecules to find leads. A whole dimension of chemical space is not being explored because its not easy to access.

Decades later his team at City College develops new synthetic approaches that enable the rational and reliable manipulation of molecules in three dimensions to control this phenomenon.

With National Science Foundation funding, Dr. Biscoe, along with Professor Matthew S. Sigman from the University of Utah, have developed a new palladium-catalyzed cross-coupling process that could reliably and rationally manipulate the 3D structures of molecules. By selecting a specific phosphine ligand, Biscoe and Sigman were able to retain or invert the geometry of alkyl boron compounds and aryl halides.

The research enables scientists to employ cross-coupling techniques to rapidly generate new compounds while retaining control of the three-dimensional architecture which can facilitate efforts to discover and develop new medicines. By understanding the effects different phosphine additives have on how palladium promotes cross-coupling reactions, they can both retain a molecule’s 3D geometry, as well as invert to its mirror image.

We’re in the business of developing tools that medicinal chemists can use to develop drugs and are conducive to finding leads.

Before this finding, getting fragments onto the palladium was a challenge. Flat molecules bond easier to the palladium unlike 3D molecules which are bulkier. There are also competing reactions that occur once the fragments are on the metal catalyst that influence the geometry of the molecule via the pathway it enters. If it enters through a mixture of a retentive and inverted pathway, the molecule will be a mixture of mirror images.

One challenge Dr. Biscoe faces is creating the building blocks needed for their chemistry. Since the chemistry is recent, there aren’t great ways to create organotin and organoboron compounds. If his team is able to find a more efficient, cheaper, and accessible method of producing them, as current methods of producing mirror images of 3D molecules are expensive and slow, the chemistry could be adopted by even those who don’t have experience in organometallic chemistry.