As batteries become increasingly integral to transitioning our energy consumption away from fossil fuels and towards renewable energies, Dr. Robert J. Messinger, assistant professor of chemical engineering at City College and NSF CAREER Award winner, is researching different chemistries and materials that could improve our understanding of electrochemical energy storage.

Dr. Messinger’s lab researches electrochemical materials, processes, and devices, along with multi-phased fluids, to solve major technological challenges in regard to how energy affects the environment. The research encompasses three distinct areas: emerging battery chemistries and concepts, multi-phased fluids for energy, and the application of nuclear magnetic resonance methods to materials for energy in the environment.

In regards to novel battery technology, which could have a societal impact, Dr. Messinger shared that contemporary research centers around the electrification of transportation and the integration of renewable energy sources into the power grid.

One approach Dr. Messinger is taking is exploring batteries, including rechargeable and aluminum-graphite batteries, that are both safe and energy-dense. While aluminum is energy-dense, it is also a stable metal and requires special cathodes to achieve the chemical breakthrough necessary to transition the battery towards practical applications. 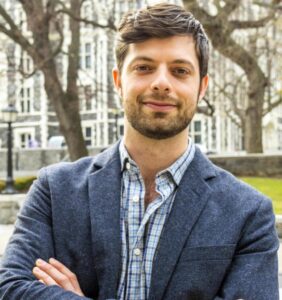 These require batteries at scale, they’re much bigger batteries than the ones in portable electronics. So what we need are materials that are earth abundant, safe to manage, environmentally friendly, low cost and energy dense. There’s researchers from all over the world, including here at City College, that are attacking this problem from different angles.

The Messinger lab is also exploring how batteries perform under extreme conditions by testing aluminum graphite batteries capable of fast charging. The lab received a $3 million three-year grant from NASA to create the NASA-CCNY Center for Advanced Batteries for Space which will test batteries for robotic spacecraft for future space missions. This will include improving their lithium-ion battery systems by utilizing advanced spectroscopic electromechanical measurements.

I reached out to NASA-JPL and proposed a collaboration along the lines that, for example, if you need high power at cold temperatures, we are developing some chemistry that might be able to solve that.

The aluminum-graphite battery, composed of an aluminum metal anode in a graphite cathode and ionic-liquid electrolytes, showed fast charging and discharging capabilities. Currently, a NASA Mars helicopter was equipped with a battery that used 75-80% of its energy to heat the component to work.

City College’s batteries could contribute to NASA missions in the Europa Lander Concept, where the space agency would send a lander to Europa, an icy moon of Jupiter, in search of life, as there is an ocean beneath its surface. With the surface temperature of the moon being minus 160 degrees Celsius and Jupiter constantly unleashing radiation, the lander would not be able to recharge with solar panels. It could instead be powered by batteries that can survive the radiation, power the equipment, last between 30 to 60 days, and work in freezing temperatures.

Computer simulations can be used to mimic space simulations and replicate how the batteries will perform across different gravity levels. The more important variable, however, is temperature, which is tested with environmental chambers that can produce temperatures between minus 70 degrees and up to 140 degrees Celsius. While facilities across the country perform tests to determine how radiation affects battery cells, the Messinger lab is capable of examining the difference in battery cells before and after radiation at the molecular level

As a professor, Dr. Messinger will seek to incorporate his research into his teaching by offering a cross-listed course in spring 2023 on energy storage that will be available for both undergraduate seniors and graduate students. He will also lead the summer workshop “CUNY School of NMR”  in collaboration with the Advanced Science Research Center to increase the use of nuclear magnetic resonance spectroscopy in non-biological research.

In the future, Dr. Messinger hopes to expand his research focus to include fast-charging lithium-ion batteries for electric vehicles, in addition to recycling materials from batteries to prevent them from being discarded alongside municipal waste.