Assistant Professor Daniel A. Keedy, a professor in the Department of Chemistry & Biochemistry in the Division of Science at The City College of New York, and a professor of the Structural Biology Initiative of the CUNY Advanced Science Research Center, recently received a 2022 Cottrell Scholar Award for his proposed project, “Illuminating Structural Motions that Underlie Allostery in Dynamic Phosphatase Enzymes.” He is one of 24 Cottrell Scholar awardees chosen in 2022. The Cottrell Scholar Award was gifted to both of his affiliations.

The Cottrell Scholar Awards are grants distributed by the Research Corporation for Science Advancement (RCSA). All awardees receive a grant of $100,000 and come from fields that include chemistry, physics, and astronomy. Proposals must involve both research and science education.

Professor Keedy has long had an interest in biology, and while attending Rhodes College in Memphis, Tennessee as an undergraduate, he also discovered a love for physics. 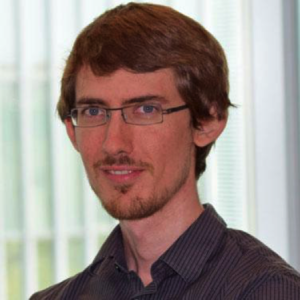 “I liked the concept that you could describe reality with mathematics. It was a cool realization that biology is subject to those same rules, and you see it most at the molecular level.”

Keedy completed his doctoral studies in structural biology and biophysics at Duke University, and later utilized experimental and computational approaches to examining protein structures as a postdoc at the University of California, San Francisco.

Keedy began teaching at City College in 2018 and has continued to build on the ideas he developed during his time as a doctoral student and a postdoc. The proposal that earned him the Cottrell Scholar Award envisions a new way to study enzyme activity.

Enzymes are proteins often targeted in pharmaceutical drug research that speed up, or “catalyze”, vital chemical reactions in cells. Enzymes are often studied using x-ray crystallography, which creates pictures of their molecular structure, but it only shows still pictures, so we have not ‘seen’ most enzymes perform catalysis. In addition, we do not know how the majority of the enzyme’s structure affects catalysis – a process that happens at the active site of an enzyme, a relatively small part of the molecule.

Professor Keedy’s project, which he will conduct at his research lab at the CUNY Advanced Science Research Center, proposes using a few new rapidly developing technologies to examine enzymes in motion.

He hypothesizes that there are motions throughout large portions of enzymes that are linked to catalysis at the active site and that parts of enzyme proteins affect each other, like windshield wipers moving in tandem.

Studying enzymes in motion would help advance understanding of enzymes and allostery – essentially, remote control, or action at a distance, in a protein structure.

“This is advantageous because for various reasons the active site inhibitors can be difficult for drug development, but allosteric inhibitors offer some real key advantages, in terms of having the drug be effective and not having off-target effects.”

Keedy believes that if we can understand these motions in enzymes, then we could learn more about allosteric mechanisms and allosteric sites, which would open the door to allosteric drugs that would solve some existing problems with active-site inhibitor drugs.

He aims to study phosphatases, a family of enzymes that are linked to many diseases, including diabetes and breast cancer, but have yet to be successfully drugged. By understanding the enzymes at the atomic level, researchers may be able to better understand their corresponding diseases.

Keedy’s education proposal is a classroom-based crowd-sourced project for undergraduates in his biochemistry course, allowing them to participate in phosphatase research.

As students learn about enzymes and Keedy’s phosphatase experiments in class, they will also have virtual field trips to Keedy’s lab to see phosphatase research in action. Eventually, the students will form groups and use modeling tools to visualize phosphatase structures and propose changes to their amino acid sequences by altering the structure.

Students will propose their ideas to their class, and the class will vote for the protein mutations that seem most interesting and promising. Using funds from the award, the mutated gene will be synthesized and characterized in Keedy’s lab, and the results will be returned to the class by the end of the semester, leading to further discussion, analysis, and possible further research.

“There are lab classes of course, but those are typically cases where the result is known. Here, we don’t know what these mutations will do – it’s an open question. What mutations should you even make? What will the answer be?”