Assistant Professor at the CCNY Department of Physics Dr. Sriram Ganeshan received a National Science Foundation CAREER award in July 2020, which provided over $500,000 to his research project on quantum hydrodynamics and the collective behavior of quantum systems.

After receiving his Ph.D. in physics at Stony Brook University in 2012, Dr. Ganeshan attended the University of Maryland, College Park to complete his first post-doctoral program in condensed matter theory.

The program led to a position at the Simon Center of Geometry and Physics at Stony Brook, where Dr. Ganeshan worked for a few years as a research assistant before becoming an assistant professor at CCNY in 2018. 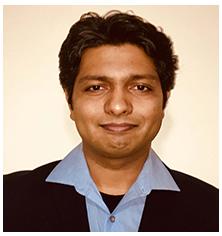 Studying the collective behavior of quantum particles was a subject of Dr. Ganeshan’s past research, but in his NSF CAREER award proposal, he detailed an approach to understanding quantum systems that involved the application of classical hydrodynamics.

“One can think of collective behavior of many electron systems as a version of hydrodynamics — you can make parallels between how water flows to how electron flows in a wire,” Dr. Ganeshan said.

“There are key differences there, but I wanted to see how I can leverage 250 years of development in hydrodynamics and apply it to more contemporary problems in quantum systems.”

Although others have attempted to apply hydrodynamics to quantum systems in the past, Dr. Ganeshan’s approach specifically focuses on strong interactions in quantum systems and the shared concept of active matter.

Dr. Ganeshan characterized active matter in hydrodynamics as “millions of spinning tops colliding among each other,” producing a “fluid-like behavior.” In a quantum system, the concept of active matter is similar to the fractional quantum Hall effect, a phase of matter in which an electron is spinning on its axis in the presence of a magnetic field.

The research idea dates to Dr. Ganeshan’s experience as a research assistant at the Simon Center, where he collaborated with faculty to study hydrodynamics at the microscopic and macroscopic levels.

Once Dr. Ganeshan began working at CCNY, he started to consider the application of a generalized framework for studying hydrodynamics to determine where similar macroscopic equations could be found.

“What we are trying to see is if you can somehow adjust your hydrodynamic equations for these complex quantum systems, they still are almost very close to what you see around in the real world, water properties or liquid properties,” Dr. Ganeshan said.

“And these little tweaks that we create to accommodate for the quantum features, will then intuitively give you some mental picture of otherwise, in a quantum realm, what happens at a mesoscopic scale.”

A core part of any NSF CAREER award project is education and public outreach, which greatly influenced Dr. Ganeshan’s decision to pursue this topic for the award.

But because he received the award shortly after the onset of the pandemic, the traditional education element never fully materialized. Dr. Ganeshan hopes he can make up for lost time and ramp up the educational outreach in the latter half of his 5-year award.

As for research, however, Dr. Ganeshan worked with his team over Zoom for almost half a year before he had the opportunity to engage in theoretical discussions over a blackboard again. Shortly after the return to in-person research, the team published a paper.

Their latest paper, published last month, is about using quantum theory and hydrodynamic equations to determine the boundary conditions for quantum systems.

“Instead of just solving equations at a classical level, we want to directly go to a quantum system and then derive some modified hydrodynamics that can be able to explain what happens in a quantum system when you imagine them as fluid,” Dr. Ganeshan said.

Outside of a theoretical context, the mesoscopic scale of electron flow that Dr. Ganeshan studies is essential to the operation of iPhones and many other modern technologies. As Dr. Ganeshan continues his research in the remaining years of his career award, his findings could be instrumental in the development of new and more efficient technology.

“Most certainly, I’m not going to making them because I’m a theorist, but we are at the phase where we are trying to understand all aspects of how an electron will behave. Collective behavior of an electron behaves like a fluid, and I want to see if these fluid properties can be observed in some of these devices,” Dr. Ganeshan said.

“But I’m just trying to explore questions, trying to understand all aspects of the problem. And who knows some aspect may be picked up and more utility-minded people can find some applications for the things that we are developing an understanding for.”