Dr. Hojjat Rostami is a recent Ph.D. graduate (Fall 2021) of the City College Grove School of Engineering in Electrical Engineering.

Dr. Rostami has worked as a product design engineer for Horiba for the past seven months, contributing to the creation of over 10 experimental setups for NASA, Standford, MIT, and several other prestigious universities.

“For biomedical research groups or physics research groups worldwide, when they need to do some experiments, they explain it to us and we design a custom-built fluorescence, and Raman microscopy setup so that they can test what they want to do.” 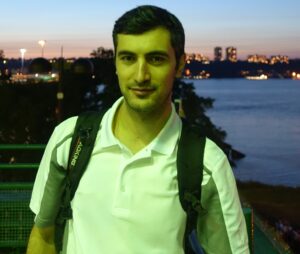 Dr. Rostami began his studies at the University of Tabriz, which was both the second oldest university and the second-largest campus in Iran. His strength and interest in physics and mathematics led him to study electrical engineering, a confluence of the two areas of research,  for both his master’s degree and baccalaureate.

At CCNY, Dr. Rostami conducted multidisciplinary research to develop different experimental setups for the creation of integrated sensors and actuators. His Ph.D. thesis was an application of this research to retinal implants, and he developed a model capable of releasing nanoliters of neurotransmitters in the retina.

Of the three primary technologies for retinal implants, Rostami’s research revolved around chemical stimulation, a technique that could both make up for the shortcomings of electrical stimulation approaches and provide neural stimulation with much higher resolution as compared to other technologies.

Dr. Rostami’s model differed from the conventional method by taking a more biomimetic approach since it involves light-actuated neurotransmitter release. The implant is meant to operate exactly as the human retina works.

“The chemical simulation approach is the most biomimetic, which is the most natural approach if we can develop an implant, but the problem with this was, up to now, there was not enough microfluidics technology to control liquid release in a single 5um-diameter pore of a highly packed 2-D array of vertical pores through a macroporous silicon structure, capable of releasing chemicals in the range of nanofluidics for retinal neurotransmitter release control.”

Most companies have yet to adopt this new technology because it is more expensive than traditional, electrical-stimulation-based models and still needs to undergo additional testing and experimentation. But Dr. Rostami’s innovation can potentially serve as a retinal implant without an external control system.

One of his current projects at Horiba seeks to integrate temperature imaging technology typically used in FLIR cameras into microscopes. The project relies strongly on his academic background in optical and sensor design.

Microscopes with this type of integrated technology can be instrumental in spotting cells with higher temperatures, which are sometimes an indicator of cancer or other diseases.

“If we can develop this under a microscope, and we can sell it as a product, this can help lots of biomedical research groups and can be useful for so many cancer detection research groups. This is what I’m interested in, this way I can feel effective and beneficial.”