Douglas Adams, the director of the office, has been leading the TCO in its effort to funnel innovations at the CUNY campuses into the marketplace. The TCO supports the researchers by licensing their intellectual property and helping them form new start-up companies.

The process starts with an innovation whereby professors, students, and employees send new technology disclosures (NTDs) to the Office. The TCO evaluates the disclosure for its commercial and market potential. “My office takes the NTD form and starts working on it to see its potential applications,” said Adams.

“What is the invention? What is novel about it?  Is there a market for it? And is it patentable?”

The TCO then shares the NTD form with a patent lawyer and files a provisional patent. Filing a provisional patent starts a critical 12-month period that the Office works closely with the inventor to strategize the future of the innovation. The office considers the technological and market risks and decides whether to patent the invention or to rely on copyright protection. “This period is very critical for us because it is not just if the invention is patentable,” said Adams. “It is about getting it from the lab to the marketplace so that people can buy, and the society can benefit.”

“The vast majority of the inventions are at an early stage,” noted Adams. “They are not mature for existing companies to license and incorporate into their product line. So, one way we address this reality is to form a company. So, professors actually start a company, and it happens many times throughout CUNY. “

During this time, the TCO encourages inventors to create a network for raising money and introduces them to the office’s own network. “I do not expect them in 12 months to come back with the fundraising,” said Adams. “But, hopefully, during that period, they get a very strong indication that there is a market for this technology.” 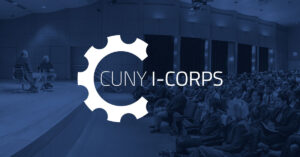 The office has another popular program designed to identify customer segments. The CUNY researchers join a three-month I-Corps Program in parallel with provisional patent applications to find the right market for their innovation. “Very often professors invent something with one customer on their mind,” said Adams. “Then there is another different market that they have never really considered, and it might be a near-term opportunity. So, I-Corp is really critical identifying customers that can use this next two to three years.”

The TCO also provides the researchers with an incubator network to help them with their applications for grants. “Having an address at CUNY incubator is a strong indication that they are in a path of a real commercialization,” said Adams. “This is going to be a company, they are going to recruit the CEO, and they are going to fundraise.”