Dr. Michael D’Ambrose received his Ph.D. in chemical engineering in December 2021 for his research work on rechargeable alkaline batteries.

Michael D’Ambrose grew up in Brooklyn, NY, and his interest in math and science persisted throughout his early life. When he chose a college, he was influenced by his older brother, a chemical engineering student at The Cooper Union for the Advancement of Science and Art in New York City. He applied for the chemical engineering program at Cooper Union and got in on a full-tuition scholarship, a practice long held by the school that was discontinued in 2014.

D’Ambrose earned his Bachelor’s and Master’s degrees from Cooper Union in chemical engineering. While there, he gained an appreciation for independent research and the role of chemical engineering in sustainability and improving energy efficiency at scale.

“I wanted to be involved in independent research that had an end goal of reducing our reliance on fossil fuels, getting renewable energy out there, and getting energy storage out there.”

He applied to the Grove School of Engineering at City College for his Ph.D., aiming to join the CUNY Energy Institute. He was accepted in 2015 and chose to be co-advised by Dr. Sanjoy Banerjee, who was researching rechargeable batteries at the time, and Dr. Robert Messinger. Dr. Banerjee tasked D’Ambrose with improving the zinc electrodes in rechargeable alkaline batteries – he had to increase the energy density, improve the cycle life, and reduce the cost associated with the zinc anode. 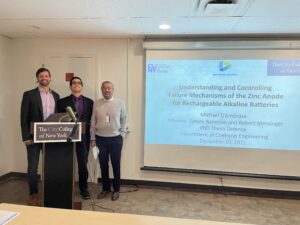 Primary batteries, like the commonly used AA alkaline zinc-manganese dioxide batteries, are single-use only. Secondary batteries are rechargeable – when outside electric energy is applied, the flow of electrons is reversed, and the battery reverts to its original state.

D’Ambrose determined that most of the failure mechanisms related to getting the zinc ions to revert back to their original zinc metal state. One reason zinc metal was not reverting was that side chemical reactions occurred, taking charge away from the forming metallic zinc. Another issue was zinc migration – the electrolyte allowed the zincate ions to be highly soluble, and they moved around the medium due to concentration and potential gradients, and it was unable to be charged and deposit metallic zinc where it was located initially. 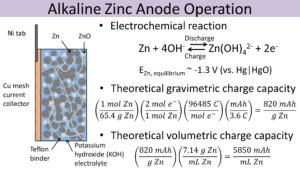 D’Ambrose also introduced a range of solid additives to the electrode. One was calcium hydroxide, which formed the precipitate calcium zincate, which is more reversible than zinc oxide. Other additives included surfactant CTAB, hypothesized to reduce zincate ion movement, a synthetic layered silicate, believed to keep material close to where it discharged and prevent excessive movement, and bismuth oxide, which improved conductivity by forming metallic bismuth.

Through these modifications, D’Ambrose and his colleagues increased the battery’s energy density, doubled its volumetric capacity, and increased its cycle life by a factor of 10, achieving 15% utilization for upwards of about 1,000 cycles.

Dr. D’Ambrose completed an internship with TRC Companies in 2021 and now has had a full-time position since January 2022. He is now working as a consulting engineer on projects in the Advanced Energy group at TRC Companies with a focus on electric grid-scale battery energy storage systems being considered for deployment by utilities and a transportation agency.