Washington Heights, adjacent to City College’s neighborhood of Hamilton Heights, is home to the largest Dominican population nationwide. Fittingly, the college is home to the CUNY Dominican Studies Institute, a research center led by Dr. Ramona Hernández, Professor of Sociology at the Colin Powell School for Civic and Global Leadership.

The CUNY Dominican Studies Institute began as a pilot project in the 1992-1993 academic year, with an initial mission to produce and disseminate scholarly information about Dominicans that emigrated to the United States. That scope expanded to include research conducted in the Dominican Republic and other Dominican diasporas across the world.

One of the Institute’s most widely circulated reports includes research that determined Juan Rodriguez as New York City’s first immigrant having arrived from Santo Domingo before the arrival of the Dutch. 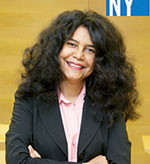 The research is organized in a way to be disseminated and digested by younger people. The belief is that Dominican people come in various formats, from those that are adults to those that are in their mother’s bellies. The idea is that this information is accessible and available to all of them.

Two other units are a part of the Institute, the Library of the CUNY Dominican Studies Institute, and the Dominican Archives, are the first and only centers in the country accruing primary and secondary source materials about Dominicans, including the largest library of 16th-century documents in the nation. Aware of the trained personnel required to examine the files, the DSI developed the Spanish Paleography Digital Teaching and Learning Tool. It is an open-source tool that promotes independent learning of writing style and calligraphy used by Spanish writers during the 1500s and 1700s. The Institute also offers summer internship and fellowship opportunities for students to work within these units. There are also grants for scholars in the field of Dominican Studies or investigating subjects related to the Dominican people.

Exhibitions are also held. Currently on display is “1961: El Año de la Libertad/The Year of Freedom,” a series of photographs from the year when the Dominican Republic transitioned to a democracy when dictator Rafael Trujillo was assassinated, ending 31 years of dictatorship. The current Dominican Republic President Luis Abinader inaugurated the exhibit. It is on display from September 21 to November 30.

Projects currently underway include a social-economic profile based on 2020 Census data that will provide insight to the U.S Dominican population in areas such as age and sex, but also trends like the decreasing concentration of Dominicans residing in New York City. There will also be a survey of 750,000 Dominicans in five states outside New York that will probe the COVID-19 pandemic’s impact. The survey will be done in collaboration with the American Studies Institute and CUNY School of Medicine.

Another study in collaboration with University of Florida and Florida International University will examine the growing Dominican population in the state to see if there are any replications between that community and New York City.

The DSI will continue working with other Latino Studies programs both within and outside CUNY to evaluate the evolving Hispanic ethnicity. One study would compare the return of investment of a college degree across Hispanics of different origins.

It is a way to ensure that the conditions of the Latino people are changing for the better. This is an Institute of research, where its’ very scholarly, but it’s connected to the people.