Dr. Ahu Aydogan wants to make sure the air we’re breathing indoors, is fresh. Her research on air filtration uses hydroponic plants to clean indoor air. The air gets recycled in the building and the outdoor air intake is minimized. This has positive environmental effects that in the long run may lead to positive health effects for people. 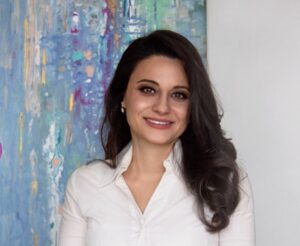 After graduating, Aydogan did postdoctoral research at CASE working with and collaborating with a company called Skidmore, Owings & Merrill (SOM), a global architectural, urban planning and engineering firm. With them, she worked on sustainability ideas to reduce the energy consumption profile of their buildings.

Her research proposes that air can be cleaned using plants and filtering media. The growing media is key for capturing toxins and the plants are key for their microorganisms, around the roots, that use the toxins as nutrients in a regeneration system.

Basically, what we’re doing is cleaning indoor air, filtering it, and recycling it back again to the indoor environment. 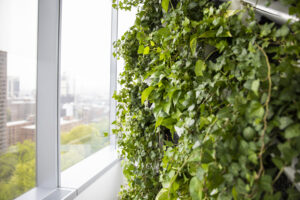 This is an important concept because most indoor air is not clean, even air that comes through an air conditioner. Indoor air gets more polluted through furniture, building materials, and humans.

The goal of her research is to create green filtering systems that replace the current synthetic filters used for heating and cooling air. Aydogan also noted that plants can be beneficial for people’s attitudes and well-being.

I want you to think about this as not just a wall you put plants on, but as a return filter for building HVAC systems to reduce energy.

Aydogan hopes her research will make for a cleaner environment and improved health outcomes. She said her work will reduce CO2 emissions, reduce energy consumption by minimizing outdoor air intake and create fresh air in an indoor environment.