While global leaders meet in Glasgow to debate how to contain and adapt to climate change, the research group of Dr. Ana Carnaval, Associate Professor of Biology at City College, investigates how environmental changes impact the animals and plants of some of the world’s most species-rich areas.

For that, the Carnaval lab uses cutting-edge methods from population genetics and genomics, several developed through a long-term collaboration with the research group of Biology professor Dr. Michael Hickerson, to uncover how species reacted to prior environmental changes: did local populations grow, shrink, or moved to new areas in response to known climatic changes. With this information, they can generate predictive models of how biodiversity may react to the environmental shifts that humans are imposing on the planet. They also map how many species, and how much genetic diversity, are expected to occur in small and large areas globally.

If you build a mathematical model that describes biological diversity as a function of environmental variables, then you can tell local conservation agencies and governments how much of biodiversity we expect to lose if climates and habitats keep on changing drastically. 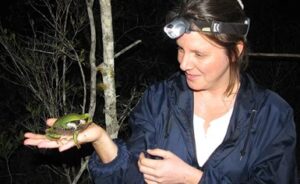 According to Dr. Carnaval, using these tools to determine genetic and therefore evolutionary diversity will be critical for future conservation efforts. As a postdoctoral researcher at UC Berkeley, Dr. Carnaval’s work revealed that the climate of the mega-diverse Atlantic Rainforest in coastal South America has been much more stable in the northern region of the forest over the past Glacial-Interglacial period (that is, the past 21,000 years). Therefore, the amount of genetic diversity within species in the north is much higher than within southern areas. Yet humans are impacting the northern sites at a much higher rate than the southern forests, even though they harbor species with significantly higher genetic diversity, and that they have been exposed to more stable climates over the past thousands of years. By working with local agencies and governments, Dr. Carnaval’s research group has been calling attention to this cryptic (genetic) diversity and advocating for their protection. By protecting genetic diversity within species, the group seeks to safeguard its ability to adapt to future climate change. This work also led the Carnaval lab and collaborators to discover and describe several species of frogs and lizards that are new to science.

Ultimately, if we want our planet to be adaptable, we want to preserve the most evolutionary diversity that we have; we want life on Earth to have as many possibilities to adapt, to change, to respond.

Although Dr. Carnaval’s main area of interest has been the Atlantic Rainforest in her native Brazil, many of her students and collaborators broaden her lab’s geographical scope. The lab’s first North American research project, led by doctoral candidate Kathryn Mercier, studies the pawpaw, a fruit tree native to North America. In a collaboration with Dr. Andrew Reinmann from Advanced Science Research Center (ASRC), and Dr. Fabian Michelangeli, curator at the New York Botanical Garden, Mercier is investigating how pawpaw species have changed their ranges or adapted in response to past climatic changes. Another recent Ph.D. graduate, Dr. Andrea Paz, built models to monitor frog biodiversity from space, using satellite data describing the environments that they occupy. Much of that work was inspired by a partnership with collaborator Dr. Kyle McDonald, Professor in the Earth and Atmospheric Sciences department at CCNY. Other projects of Dr. Carnaval and her group have focused on lizards of the Amazonian rainforest and the Wet Tropics in Queensland, Australia.

Some of the biggest challenges that our planet has to deal with relate to the biological diversity we have left in the tropics, and the ecological services they provide. They are important for the entire globe. We have so much carbon stored in the tropics, crucial regulation of gas exchange, fundamental processes related to the global circulation of ocean water. Studies of tropical areas have still a lot to contribute. 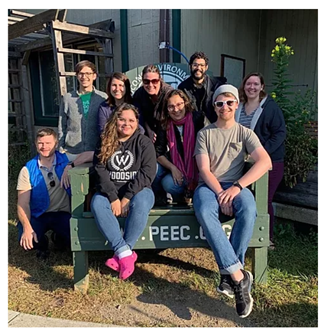 The Carnaval Lab in Southern Brazil to conduct fieldwork

Soon, Dr. Carnaval looks forward to progressing with her lab’s fieldwork in North and South America, which were largely interrupted by the pandemic. She is also looking to expand her group’s reach to include research at the interface of science and policy. To that end, she has been collaborating with Dr. Jean Krasno, Director of International Relations at the Colin Powell School for Civic and Global Leadership. Dr. Krasno investigated Brazil’s nuclear program for her Ph.D. dissertation and remained interested in Brazilian environmental policies and politics. Together, Dr. Krasno and Dr. Carnaval recently created a Master’s-level course, Climate Change, Biodiversity and the Political Process, which has been co-taught to a mixed audience of science and policy CCNY students and emphasized the interdisciplinary nature of the work that needs to be done to address our planet’s future. The course should be offered again in the Fall 2022 semester and is available to senior undergraduate students.

Dr. Carnaval was the recipient of a 2021 CUNY Interdisciplinary Research Grant, along with Dr. Krasno, Dr. Anthony Cak, Associate Director of the Environmental Sciences Initiative at the ASRC, Dr. Charles J. Vörösmarty, Director of Environmental Sciences at the ASRC, and Dr. Sherrie Baver, Director of the CCNY Latin American and Caribbean Studies Program. Their project will study the trade-offs between food production and biodiversity conservation in southern Brazil and combine insights from the biological, environmental, and social sciences.