Paralysis affects over 5 million people in the United States, and with limited treatments that number is likely to increase. There are a variety of causes of paralysis, which include medical conditions or accidents. These incidents can result in spinal injuries that damage and interrupt the connections between the brain and the spinal cord. According to the National Spinal Cord Database, each year there are over 17,000 cases of spinal cord injuries reported.

When these injuries occur, the communication between the brain and the spinal cord is interrupted. The signals for movements that the brain initiates, like walking or hand movements, are halted. Sensory messages that travel along the spinal cord to the brain are also halted by the injury.

The solution to correcting paralysis is deceptively simple; rebuild those connections among nerve cells so that the brain can com 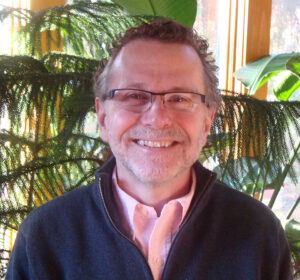 municate to the spinal cord. What is deceiving about this is that the body is usually good about repairing wounds on its own, but this is not the case for nerve cells. It is nearly impossible for nerve cells to rebuild on their own.

This is where Dr. John Martin, a Professor in the Department of Molecular, Cellular & Biomedical Science at the CUNY School of Medicine, comes in. Most of his career has been devoted to finding that elusive cure for paralysis. His experiments use a technique called neuromodulation to stimulate nerve cell (or neuron) functions in the spinal cord and brain, as well as engineered biomaterials to help repair the injury site.

His lab uses animal models to study the problem of neural repair. The animals range from mice to rats to cats.

Different animal species can be used to address different questions. For example, mice are best for genetic repair strategies; and rats for a wide range of neuromodulation and biomaterial approaches.

The team uses cats, which are a large-animal model, to translate from the animal to the human. They hope to take what they have learned from the animals to create therapies for humans to alleviate mobility impairments.

When damage is caused to nerves the brain and the spinal cord are both still functional, but without the wire that connects the two, they are unable to communicate. In regenerating the growth of the damaged connector, or axon, the hope is that they can help in the repair.

An axon, or nerve fiber, is a long thin projection (thinner than a human hair) of a nerve cell, or neuron, that conducts the electrical impulses for communication. Axons are the primary transmission lines of the nervous system, and as bundles, they help make up what are known as nerves. 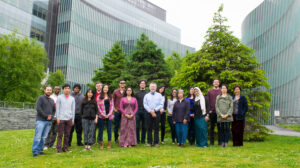 The lab’s approach (using neuromodulation) to boost neuronal activity, assists in the healing of spinal cord injuries and helps to restore movement control. Scientists believe that our neurons stop growing at or shortly after birth which is why having the ability to produce new ones is imperative to the cure.

Using external stimulation, like an electrode, Martin’s team wants to promote activity, with the hopes that a more active cell will regenerate an axon. This approach is combined with physical rehabilitation, biomaterials, and gene therapy to potentially boost the healing of the wound in the spinal cord after an injury and give those suffering hope.

Think about two people calling each other on landline phones, on landlines, and if the wires are broken because of a storm the phones themselves are working, but they can’t communicate.

Martin decided that he wanted to use his interest in biology to do some good and find a cure for spinal cord injuries. “Promoting function after a spinal injury would be extraordinarily impactful, said Martin. “Moreover, if we, as a field, can cure paralysis after a spinal injury, we can also help brain repair after stroke.”

Martin attributes the success of his lab’s research to the work of the entire team, from graduate students to postdoctoral scientists to technicians. While he is the head of the lab, Martin highlighted the importance that each member plays in moving closer to a cure for paralysis.

Understanding The Release of Dopamine and Serotonin to Improve Therapeutics — Dr. Gonzalo Torres