Understanding The Release of Dopamine and Serotonin to Improve Therapeutics — Dr. Gonzalo Torres

As Chair of the Department of Molecular, Cellular & Biomedical Sciences at the CUNY School of Medicine, Dr. Gonzalo Torres devotes his time to running the department, mentoring junior faculty through his NIH-funded programs, and applying molecular approaches to study two of the most important neurotransmitters: dopamine and serotonin.

Dr. Torres’ research is primarily concerned with how neurons release dopamine and serotonin to communicate with each other, specifically the alternative release of these neurotransmitters through proteins he identifies as transporters.

In the dopamine system, “these pr 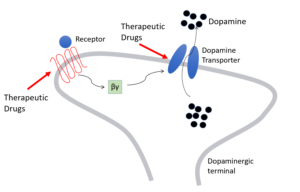 oteins, these transporters are the main target of drugs of addiction like amphetamine and cocaine and also drugs that are used to treat attention disorders,” Dr. Torres said.

“So, by looking at these particular mechanisms we may be developing new opportunities to develop drugs for these conditions — drug addiction and attention disorders.”

Aside from being affected by common psychostimulants, the proteins that act like transporters within the dopamine system are critical to the regulation of dopamine levels to maintain homeostasis in the brain.

Proteins tasked with transporting serotonin within neurons are also targeted by therapeutic drugs such as antidepressants, which makes the understanding of transporters vital to the development of “novel therapeutics for depression,” according to Dr. Torres.

Shortly after receiving his Ph.D., Dr. Torres began working with the dopamine system in 2000 at a lab at Duke University. With funding from the National Institutes of Health and other health foundations, he has spent the last two decades analyzing dopamine and serotonin transporters, collaborating with undergraduate students, research associates and fellow field experts from the City College of New York, CUNY and other universities nationwide.

Although the function of proteins as transporters for neurotransmitters has been studied extensively, Dr. Torres’ work for the past eight years has been focused on how these proteins not only recapture dopamine and serotonin back into the neuron, but release both of these neurotransmitters. Currently, he is searching for the specific proteins and signaling mechanisms in the brain that trigger the transporters responsible for releasing dopamine and serotonin and trying to understand how they function at a cellular and molecular level.

Dr. Torres anticipates this distinct mechanism of the transporter will be the focal point of his research for the rest of his career because there is much about the release of dopamine and serotonin from these transporters that remains unanswered.

Last year, however, Dr. Torres’ research was temporarily stymied by the pandemic.

When the lab shut its doors for several months due to lockdown measures, Dr. Torres and his team were forced to discontinue experiments on proteins and brain tissue in vivo, in animals, and in vitro, in cells.

“The dopamine system is a complicated network of neurons in the brain and trying to tease out these particular mechanisms is not easy,” Dr. Torres said.

“So, we need to apply sophisticated techniques and the implementation of these techniques, especially now with the pandemic, has been challenging.”

Access to the lab was integral to Dr. Torres’ research, but the abrupt shift to remote work did not slow him down.

From his computer, he continued to study the relationship between proteins and transporters, utilizing computational models to predict the precise location in which they interact in the brain. In his time away from the lab, Dr. Torres also accumulated and published data collected over the past few years and produced a review article within his field.

Now, in the waning days of the pandemic, Dr. Torres and his team have tested the predictions they made with computational models and found the actual results of their new experiments in the lab to be consistent with those models.

These computational models will have a prominent role in their testing going forward, as it has allowed them to accurately predict the location of regions of interest. Virtual screenings of these regions will be instrumental to achieving their short-term goal of discovering which “receptor and signaling mechanism” is involved in the release of dopamine and serotonin, according to Dr. Torres.

“That’s the immediate [goal] because if we find the receptor, we have another opportunity to target a receptor for therapeutic possibilities in addiction, depression, and attention disorders.”

Dr. Torres hopes a greater understanding of the transporters will aid the discovery of new therapeutic drugs for attention disorders and depression that trigger the release of dopamine and serotonin through transporters and are less addictive than medication commonly prescribed in those instances, such as Adderall.

“What if we now discover new drugs, new therapeutics that can do this but in a more selective way, in a safer way, because amphetamine is also addictive,” Dr. Torres said.

“Clinical trials is a major goal in the future but that, I hope, is probably the trajectory of this research.”