Dr. Elizabeth Biddinger is an Associate Professor in Chemical Engineering at The City College of New York. Her research focuses on green chemistry and sustainable energy applications, including research areas such as carbon dioxide utilization, decarbonization, energy storage and technologies, ionic liquids, and catalysts.  Her energy research earned her the prestigious 2018 U.S. Department of Energy Early Career Award. She is using the money she received from this award to conduct research that will enable the chemical industry to understand how to lessen fossil fuel usage by converting plant and plant-derived materials into fuels and chemicals. 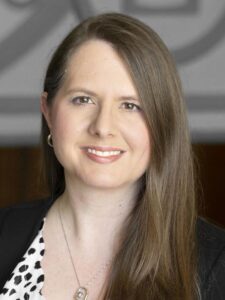 Biddinger researches this with her group, The Biddinger Group at CCNY, a group of nine students, composed of post-doctoral, undergraduate, master’s, Ph.D., and guest researcher students.

We’re interested in using electricity to drive chemical reactions. Traditionally, fuels and chemicals are made using processes that we heat up to hundreds of degrees Celsius, so to do that, we are burning fossil fuels to heat reactors.

Biddinger is researching how biomass molecules can interact with copper catalyst electrodes and how the rate of reaction can increase.

We are using advanced reaction engineering tools and spectroscopy so we can see how the molecule vibrates, to determine how it’s interacting with the electrocatalyst. This way, we can see if better catalysts can be designed.

They look at how the molecule interacts with the copper catalyst electrode; how does the molecule come to the surface? and how does it interact? and how can we increase the rate of reaction from this information?

Winning the Early Career Award has opened more opportunities for Biddinger. She is currently Deputy Director for The Center for Decarbonizing Chemical Manufacturing Using Sustainable Electrification (DC-MUSE). DC-MUSE is a partnership between a diverse group of experts, in fields like chemistry and social sciences, whose goal is to tackle engineering barriers so that the chemical industry can be electrified.

Biddinger was one of 84 recipients nationwide of the DOE Early Career Award. She received $750,000 over five years. Initially, Biddinger was granted internal funding from CCNY to prove she had preliminary research to show why her research was important to be able to apply for the DOE award.

Biddinger is also researching the properties of electrolytes that make lithium batteries either favorable or unfavorable. Lithium-ion batteries are generally used in our laptops and phones. Lithium-metal batteries have more energy density than lithium-ion batteries, allowing for our devices to be used without charge longer, though lithium-metal batteries have safety concerns. She wants to make lithium batteries safer and more efficient so that they can handle extreme temperature conditions. Her work studying switchable electrolytes for battery safety earned her the 2016-2017 Electrochemical Society – Toyota Young Investigator Fellowship.

Lithium-metal batteries have a lot of promise but have other challenges. We want to find electrolytes and ionic liquids that will stay liquid at very low temperatures and maintain sufficient conductivity so batteries can perform satisfactorily.

These batteries have high promise for energy density, but they also have issues with rechargeability, so Biddinger is considering electrolytes that can enable a more uniform deposition of lithium metal onto the electrodes. Biddinger is also investigating how to make the batteries more efficient in smaller sizes.

Since the end of the five years is approaching for her DOE Early Career Award, Biddinger plans to seek more funding to continue her research in biomass electroreduction. She also hopes to use her research on batteries to help NASA utilize them for space applications.